From Enlace Hacktivista
Jump to navigation Jump to search

On September 3rd, 2012, @AnonymousIRC posted a statement on behalf of the hackers, ostensibly AntiSec, claiming that:

During the second week of March 2012, a Dell Vostro notebook, used by Supervisor Special Agent Christopher K. Stangl from FBI Regional Cyber Action Team and New York FBI Office Evidence Response Team was breached using the AtomicReferenceArray vulnerability on Java, during the shell session some files were downloaded from his Desktop folder one of them with the name of "NCFTA_iOS_devices_intel.csv" turned to be a list of 12,367,232 Apple iOS devices including Unique Device Identifiers (UDID), user names, name of device, type of device, Apple Push Notification Service tokens, zipcodes, cellphone numbers, addresses, etc. the personal details fields referring to people appears many times empty leaving the whole list incompleted on many parts. no other file on the same folder makes mention about this list or its purpose.

Notably, at the beginning of the year Stangl had been a participant on the leaked FBI call about Anonymous. The New York office was also responsible for the recruitment of Sabu, which had been revealed in March.

The following day, the FBI posted on their website and Twitter that "At this time, there is no evidence indicating that an FBI laptop was compromised or that the FBI either sought or obtained this data." Journalists and analysts quickly pointed out that NCFTA was seemingly a reference to the National Cyber Forensics and Training Alliance, a non-profit that works with the government. The NCFTA similarly denied involvement. The Anonymous leak platform Par:AnoIA cast doubt on FBI's denials and stated their sources were more trustworthy.

An analysis performed by David Schuetz of Intrepidus Group, a New York-based mobile device security consulting firm noted a pattern in the leaked data - references to BlueToad, an app developer that provided services to 6,000 different publishers. On September 10th, BlueToad released a statement that "A little more than a week ago," they had been hacked and soon after "an unknown group" had posted the data online. 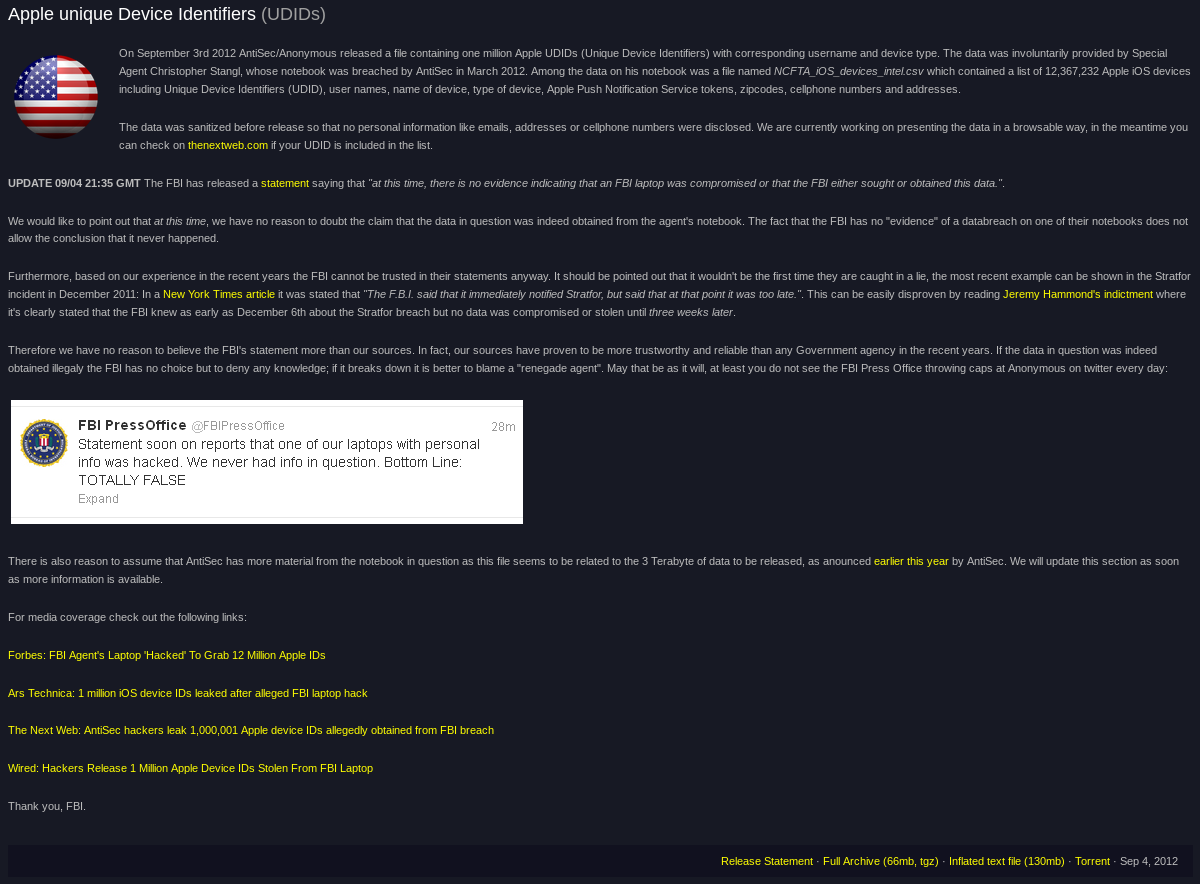